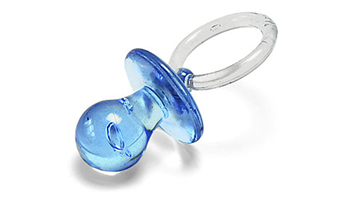 This is a story that current Pastors Beyond Dir, Marty & Susan used to explain their role with each missionary team they visited. This is the true story of their granddaughter and grandson. This pacifier has traveled the world with them.

Many parents are truly thankful for a pacifier when they have small children. This is the story of one small child giving up her pacifier and what she did with it.

When she was 2 1/2 years old her mother and father began talking with her about giving up her pacifier. They decided that when she was 3 years old it would be the time to say good-bye to her pacifier. They discussed what might be a good way to dispose of the pacifier and soon Alaina herself came up with an idea. “I know, I’ll give it to Papa Marty (Grandpa) and he can give it to the missionaries!” So, on her 3rd birthday, parents and grandparents watched as Alaina wrapped her pacifier in wrapping paper and gave it to Papa Marty. They put it in our car and that was the last Alaina saw her pacifier for quite a while. She was very brave. Her Daddy slept with Alaina for a few nights until she was able to go to sleep without her pacifier.

Since then we have talked with Alaina and her parents as to what she remembers and thought of her pacifier... She considered her pacifier as her best friend at one point in time. This pacifier helped her when she was tired, sad, scared, lonely or needing some quiet time alone. She sent her “best friend” to many missionaries throughout the world with the hope that it would bring friendship, encouragement, rest for their soul, a shoulder to cry on when they are sad or any other reason they may desire.

Alaina’s pacifier NEVER REALLY solved her problems, but it did help facilitate an atmosphere in which the problems could be tolerated until Alaina herself found the solution. We trust that as a pastor & wife, we will become something similar to this pacifier during our stay with you on your field of ministry. We, with Pastors Beyond, do not go to the field to solve missionaries' problems, but to offer friendship, comfort, encouragement, a listening ear, prayer or rest. We go in faith & trust that God will use us to minister to them.

The story has continued a little longer. When Philip, Alaina’s brother, was 2 1⁄2 again the subject came up as to what to do with his pacifier. He was not as attached to his pacifier as Alaina; however, there was much discussion. At one point I, Grammie, had Alaina in my lap and Philip was across the room in Papa’s lap. I had Alaina’s pacifier and was explaining to her how the missionaries had told me to thank Alaina for sending her pacifier to them. She listened, took everything in, and then said “Philip is going to send his pacifier to the missionaries, too!” Philip looked at Alaina surprised but shook his head “Yes!” When he had his 3rd  birthday we got a phone call that he had wrapped his pacifier and was sending it on to us ‘to take to the missionaries’. What would Philip send to you...? His love of a fun time and the times sitting with his pacifier and a book about baseball which brought great comfort. When Philip needed to listen to mom or dad, his pacifier helped him keep his mouth closed. When Philip was frightened his pacifier helped him be brave and gather courage to meet the challenge. Perhaps we can accomplish some of Philip’s uses for his pacifier also.

As Pastors Beyond couples we go to missionaries in the role of servant. We desire to serve their needs. We promise & commit to listen with all we have, pray as God leads and minister to them as we go.

Designed by RocketTheme
Member Login
Back to Top